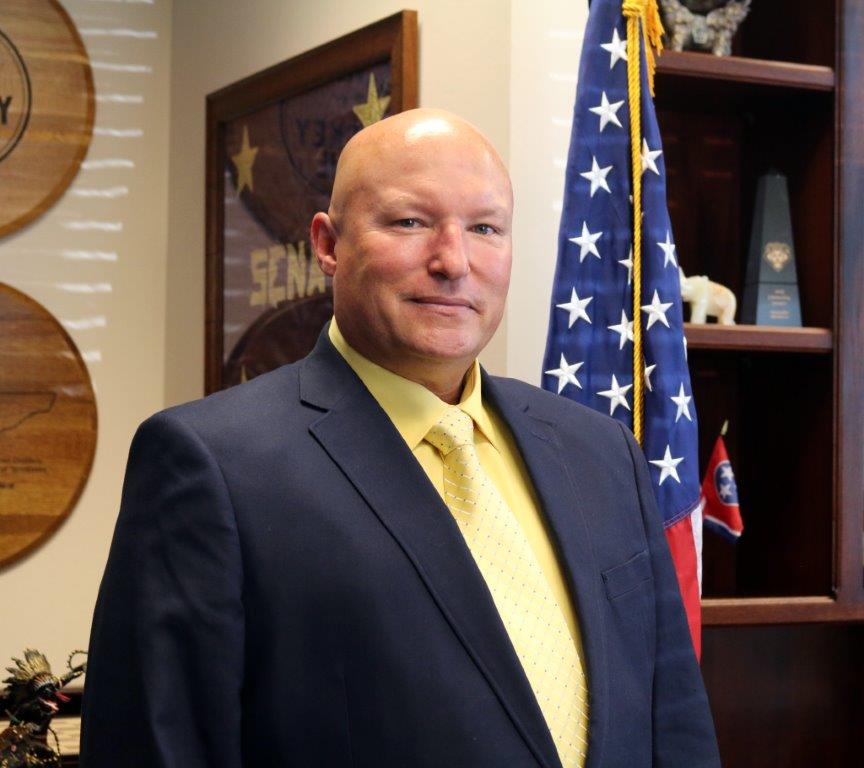 “It has been a privilege and honor to serve,” Hudgens told County Commissioners and Mayor Ketron in a letter stating his intent to retire, noting his “end of watch has come.”

Hudgens, born on a dairy farm right here in Rutherford County, knew from a young age he wanted to be a paramedic. Attributing his interest to a popular 1970s television show Emergency, Hudgens said, “Mom and Dad let me come home every day and watch the show before milking the cows,” recalling that the family television was an old black and white model. “As a result of that show, I knew what I wanted to do.”

In 1984, an eager and excited Hudgens began his career with Rutherford County. “Even though it was a volunteer position at the time, I took my responsibilities seriously and took advantage of all the training and educational opportunities available,” he stated.

After completing emergency medical technician (EMT) school, he was hired by RCEMS and soon obtained his paramedic licensure. “For me, paramedic school was not easy,” Hudgens admitted, “I studied twice as long and requested extra clinicals.” Hudgens was later promoted into a supervisory position as a support supervisor, and around a year later, was promoted to Lieutenant. During his time serving in this position, one of his colleagues, a captain, was stricken with an unfortunate illness that would eventually lead Hudgens into that role.

As time moved on and retirements occurred within the department, Hudgens was asked to serve as Interim Director. “This was a role with unique challenges that I’ve never faced before, but I’ve never backed down from a good challenge.” Hudgens said even still, the decision to serve in this capacity was one that took a lot of soul-searching and prayer. “I decided that if God chose this path for me, then that was the path I was going.” Soon after accepting the interim role, he applied to serve in the position full-time and received the opportunity. “My desire to serve the citizens at that time and even today was still just as strong as the day I started in 1984.”

“I want to personally thank Mayor Ketron, Chairman of the Public Safety Committee Pettus Read, and Chairman of the Budget Committee Robert Peay for believing in me, trusting me, and respecting me,” Hudgens said.

Over the years, Hudgens witnessed many changes within his beloved County and the ambulance service. “Rutherford County is my home. Many of my family members fought war here…farmed here.” In his early days as an EMT, the county size was the same, but the population was much smaller. “It was not uncommon for calls to come in directly to the station. Often times we wouldn’t even need the map, we knew exactly who lived there and who we’d be tending to. We didn’t have GPS back then either!”

Hudgens has seen technology progress greatly. “I remember the time when we actually had to make our own equipment,” noting that sometimes splints were made out of catalogs and magazines.

There is no doubt that Hudgens made a significant impact in the lives of others over the last 32 years. When asked about his most memorable calls, he immediately turned to two that he will never forget.

The night of May 16, 1998 changed Jeremy Johnson’s life forever. Following his high school prom, Jeremy was driving down Halls Hill Pike and without being able to recall just exactly how it happened, he flipped his car, ended up ejecting from the vehicle and was at the bottom of a steep embankment.

A friend, who just happened to be passing by, saw the lights from Jeremy’s car but upon approaching the car could not find a sign of anyone. Just as he was leaving the scene, he heard rustling in the bushes where Jeremy landed, and immediately called for help.

Hudgens and his partner Pam Frank responded to the scene. “With an obvious closed head injury, Jeremy’s jaws had clamped down, preventing him from breathing,” said Hudgens. “We gave him some medicine to relax his face and were able to clear his airway before transporting him to Vanderbilt Medical Center. I did not give him much hope at that point. He was in bad shape.”

Jeremy suffered a fractured skull and severe nerve damage which left much of his face paralyzed. He spent a couple of months in the hospital until he was well enough to be transferred to Vanderbilt Stallworth Rehabilitation Hospital to undergo extensive physical and cognitive therapies. His total recovery with both in and out patient therapies took about six months.

Jeremy, now married with two beautiful children, remains friends with Hudgens today, giving him the credit for saving his life and helping him to live a full one. Hudgens attended his wedding and was one of the first stops for the family each time one of their children was born.

Hudgens said saves of this magnitude only happen once or twice in your career. “I will never forget that night as long as I live.”

Hudgens’ second most memorable call was when he assisted in the delivery of premature twins. Not sure of the year, he clearly remembered holding the two babies, stating they were not any bigger than baby squirrels. “The mother was hemorrhaging badly,” he recalled. “I was worried about her, but she was worried about her babies.” He did not consider the babies revivable at that time. He said they were making small movements, but couldn’t even cry because their lungs weren’t fully developed. He knew the mother needed to get to Vanderbilt and quickly!

“Often times we didn’t know the outcomes of incidents of this nature,” Hudgens said.

Around 22-23 years later while visiting a nursing home, Hudgens was approached by one of the workers. She asked if he remembered her, and he could not quite place it, but knew something about her was familiar. She asked him to wait as she retrieved two other nursing employees, two six-feet-tall blonde ladies, who just happened to be the premature twins that he helped deliver all those years ago! The woman who approached him was the mother and she introduced her twin girls, who were now traveling nurses. “The mother remembered me after all those years. I couldn’t believe it…I had changed a lot by then,” he chuckled.

Hudgens also remembered simple things like showing compassion to elderly residents who just wanted a little company from time to time. There were no real “emergencies” but they were lonely. “We always tried to treat patients like our family members.” As a result, he’s been invited to weddings, funerals— been asked to serve as pallbearer. He’s even paid out of his own pocket to have unclaimed persons respectfully and properly buried, a majority veterans.

During Hudgens’ time as Director and particularly through the COVID-19 pandemic, Carl and his team have made notable strides in protocols and initiatives that have peaked the interest of other counties across the state. The department went over a year without a single positive COVID case internally.

Hudgens also initiated the concept of the County having its own Forensic Center, a project that he intends to continue being involved in until it is complete.

He would also like to see the department start offering community paramedicine and continues to support the research, development and implementation involved in this.

The department recently implemented a 24 hours on/72 hours off schedule with a total of four operating shifts. A change that allows more work/life balance for employees while truly taking into account their mental and physical health and wellbeing.

Lastly, two medical directors were hired to oversee protocols for the entire county. Hudgens feels confident that those directors will help Rutherford County set the national standard for EMS.

“I can honestly and proudly say that I have put every ounce of energy, knowledge, and wisdom I have into Rutherford County EMS over the years in an effort to continue our reputation of being the most elite provider in the state,” expressed Hudgens. “I pray that I have served our citizens and leaders well, and that whomever succeeds me in this position has just as much love, passion, and loyalty to offer RCEMS and the community.”

Hudgens says he will miss the fast pace because he isn’t one to slow down. Though fishing will definitely be one way he will occupy his free time, he says he’ll likely also volunteer more time with his church and continue to support programs and initiatives in the developmental phase at RCEMS.

“Carl Hudgens has served this county and its citizens and visitors well during his time at RCEMS,” said Mayor Bill Ketron. “He will truly be missed as a fixture in his department and the County as a whole. We wish him a truly enjoyable season of retirement and extend our sincere gratitude for his dedicated service.”